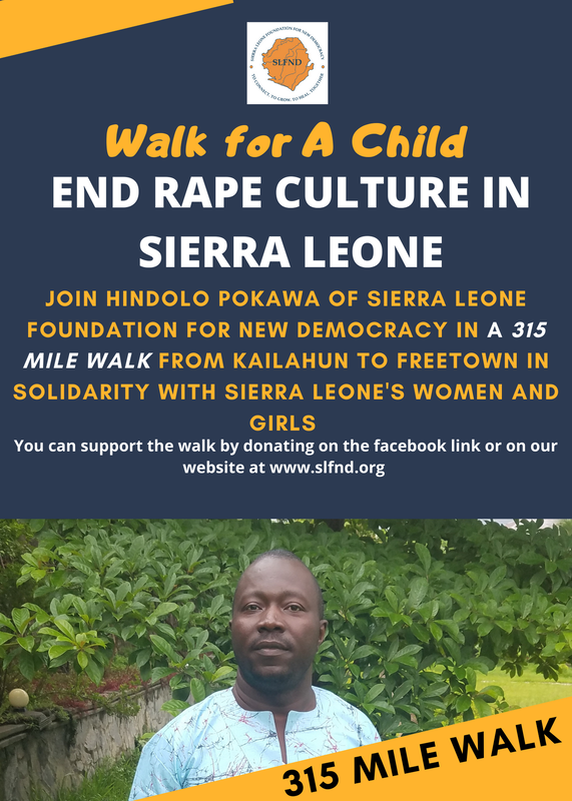 In June of 2020, Kadijah Saccoh, a 5 year old girl from Sierra Leone was raped and strangled to death by her older cousin. This tragic case sparked international attention to the crisis of rape as a violence against women that is becoming rampant in Sierra Leone.

In 2019 the President of Sierra Leone, Julius Maada Bio, declared rape and sexual assault a national emergency. He reported that the country had more than 8,500 reported cases of sexual and gender-based violence per year and that seventy percent of survivors of this traumatic experience are under the age of 15.

Rape of young girls and women continues on a daily bases. Sierra Leone is facing problems that the Sierra Leone Foundation for New Democracy (SLFND) is collaborating with women's organization in Sierra Leone and in the US to address.

2020/2021, I will be walking a 315 mile from Kailahun (Eastern Sierra Leone) to Freetown (Capital city in the Western Area of Sierra Leone) to call attention on this barbaric and harmful attack on girls and women in Sierra Leone. Your funds contributed would go towards preparation for the walk, documentation of stories from survivals, and supporting a national platform for girls and women's safety in Sierra Leone.
Anything that is learned, can be unlearned. The problem of rape culture and sexual violence in Sierra Leone requires awareness, education, counseling, and ongoing support. Your support is crucial to our efforts to raise awareness of this prevalent issue plaguing the country, the African continent and the world.

As a man, I do not know how it feels to walk in the shoes of women and girls facing rape. I am therefore undertaking this walk in solidarity with women and girls. I invite you to walk in my shoes to support women and girls in Sierra Leone.
​
Sierra Leone Foundation for New Democracy works in partnership with communities to build the foundation for citizens of all ages to deliberate and enact new, non-adversarial alternatives that nurture democratic relationships and decision-making within and among individuals, families, institutions, and the environment.
Support Us